In Madagascar, what future for vanilla? The black gold at risk! 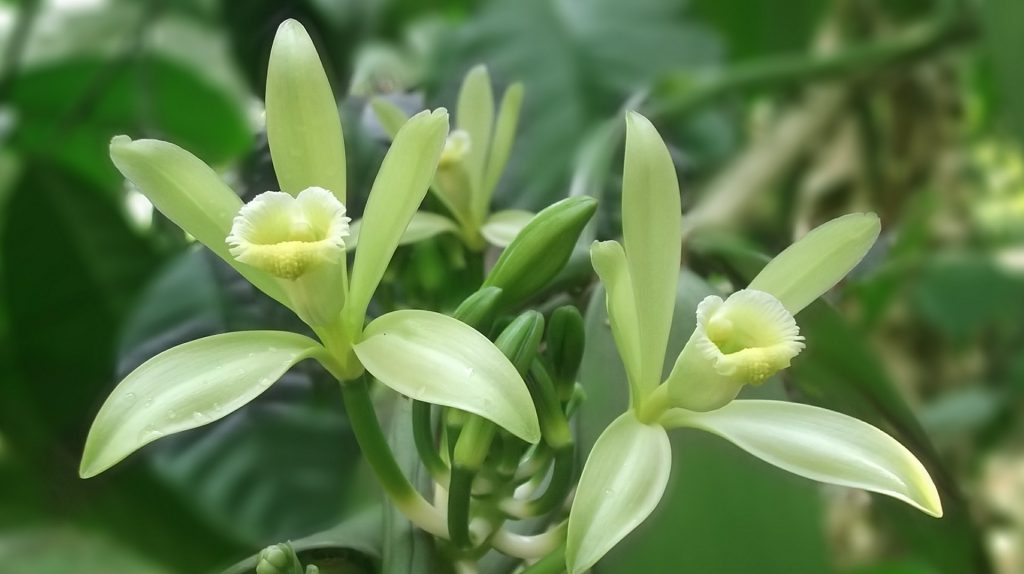 Vanilla is now the second most expensive spice in the world after saffron, and is an important issue in Madagascar, where more than 80% of the vanilla produced worldwide comes from. Grown mainly in the SAVA region, in the northeast of the country, the vanilla orchid has become real black gold and  provides a living for between 80,000 and 100,000 farmers. A short-lived Eldorado? For several years, the vanilla sector has been surrounded by difficulties: corruption, soaring prices, deteriorating quality, insecurity, natural risks, and competition from synthetic vanilla.

To understand the recent history of vanilla, we have to go back a decade. A complex socio-political context led to the institutional weakening of the Madagascan state which already had problems, the deterioration of governance indicators, and the resurgence of corrupt practices. In the SAVA region, a historical vanilla production area, the almost non-existent road infrastructure and geographical isolation facilitated the gradual takeover of the area by the “vanilla barons”.

The declining supply, impacted by successive climatic disasters that destroyed vanilla plants [1] and the sharp increase in international demand, led to a surge in prices: from an average price of less than 100€/kg over recent decades, the price of vanilla reached nearly 650€/kg in February 2018. Good news, in the short term, for a country whose economy is mainly based on agricultural products and whose export earnings are increasing. In the long term, the outcome is less certain. The pre-existing macroeconomic Madagascan state fragility is likely to be made worse by the unpredictable  instability of the vanilla sector [3], and with the backdrop of the possible emergence of Dutch disease [2]. 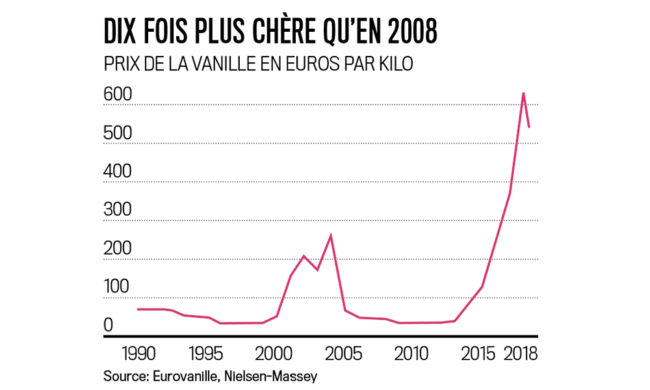 These almost unreal prices have made the queen orchid a real black gold. The SAVA region, a landlocked region where roads are almost non-existent, has gradually become a lawless area: vanilla pod theft is increasing, leading farmers to harvest before maturity or to sleep in their fields for fear of losing the fruit of their labour, while people taking the law into their own hands to provide local solutions, is leading to serious abuses.

Pods harvested too early are vacuum-packed to artificially inflate their weight. A practice that leads to a progressive degradation of the quality of Madagascan vanilla – a quality that used to be celebrated throughout the world.

Things are starting to change.

The present speculation in vanilla pods does not improve things. The SAVA region is located at the heart of the illegal trade in rosewood, a very slow-growing precious wood whose export is prohibited by CITES [4], but which is regularly shipped to China with complete impunity [5]. The dubious fortunes resulting from the illegal rosewood trade are “recycled”: speculators buy large amounts of vanilla and store it until they can sell it to major exporters at a higher price. 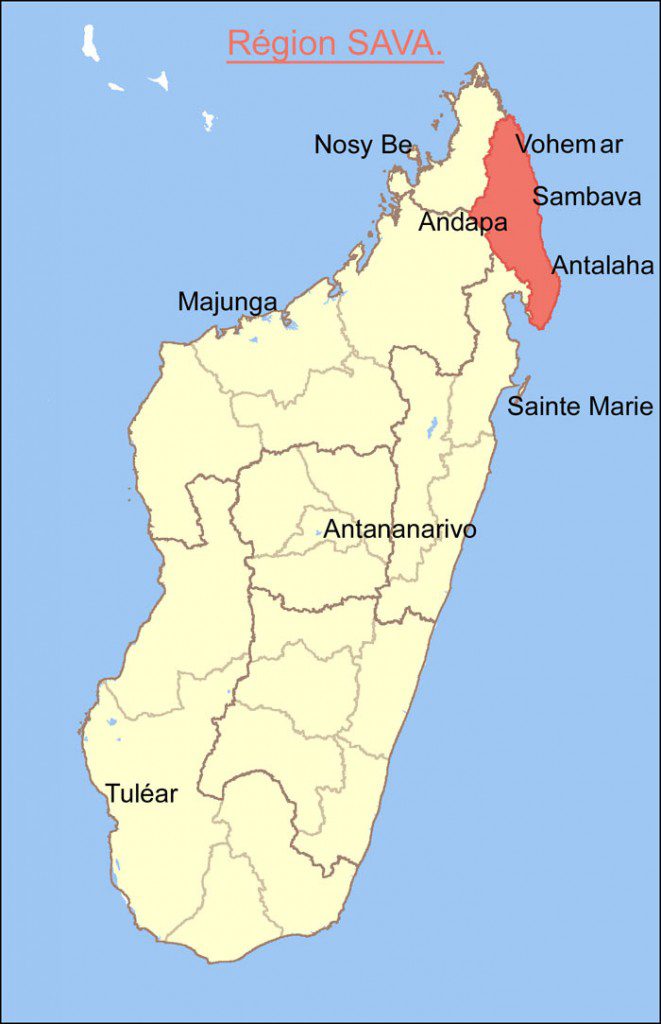 The SAVA region, whose name comes from the contraction of the first letters of the main cities, concentrates most of the vanilla production.

The picture is bleak, but hope remains. This is a situation closely followed by the European and American buyers who are Madagascar’s leading vanilla importers, and the situation could gradually take a favourable turn. Recently, the price has stabilised at around 500€/kg due to a small drop in demand and an increase in export volumes during the last harvest (2018/2019). At the institutional level, in an attempt to overcome the problems, the government has officially decided on pod harvesting dates for each village and prohibits vacuum packaging for pods harvested too early. Businesses are also mobilizing: the establishment of the Livehoods investment fund by Danone and Mars is an attempt to make the sector more transparent, and above all, to secure good quality, by working with the Madagascan NGO Fanamby [6]. Similar objectives are being pursued by the inter-professional platform Sustainable Vanilla Initiative, whose 22 members are trying to improve pod traceability. If no profound reform of the sector is undertaken, Madagascan vanilla will experience the last moments of a short El Dorado. A major challenge, but one that brings hope.

[1] The latest, Cyclone Enawo in March 2017, caused the loss of nearly 30% of vanilla plantations.

[2] In a context marked by soaring commodity prices, the increase in export earnings tends to appreciate the local currency due to the massive inflow of foreign currency. The massive exploitation of the rent (is this clear ?) becomes a priority and limits investments in other productive sectors. In the long term, when the natural resource becomes scarce, the economy enters a phase of stagnation.

[6] Over ten years, two million euros have been invested to enable the modernisation of production techniques and the creation of a farmer-owned cooperative.

Entrepreneurship for a better tomorrow in Guinea

Matthieu Lougarre: « More than synthetic vanillin, it is the legislation on product labelling that is problematic »