Tax legislation in question: the role of Mining Agreements in the African gold sector

Until the 1990s, the African continent, even though it is rich in mineral resources, attracted little mining investment.

Until the 1990s, the African continent, even though it is rich in mineral resources, attracted little mining investment. END_OF_DOCUMENT_TOKEN_TO_BE_REPLACED

By : LAPORTE Bertrand and DIALLO Mamadou Ciré
END_OF_DOCUMENT_TOKEN_TO_BE_REPLACED
No Comments on Tax legislation in question: the role of Mining Agreements in the African gold sector
Photo by Plann on Unsplash
Insights

Photo by Plann on Unsplash

A tax on internet voice calls such as WhatsApp, Skype, and Viber triggered massive protests in Lebanon, which brought down the government a few months later. Several other countries, especially…

A tax on internet voice calls such as WhatsApp, Skype, and Viber triggered massive protests in Lebanon, which brought down the government a few months later. Several other countries, especially in Sub-Saharan Africa (Uganda, Zambia, Kenya), have raised or tried to raise (Benin)[1] similar taxes. These experiences reflect the difficult choice of States torn between their desire to take advantage of new opportunities for tax revenue while preserving the dynamism of activity and the level of acceptability of telecoms taxes.

In fact, the telecoms sector is one of the most dynamic economic sectors in Africa and still displays significant growth potential. In 2017 subscriber penetration remained low, at around 45% on average in Africa, compared to more than 60% in other developing countries (GSMA intelligence, 2018). These figures suggest that the catch-up is continuing and there is still significant growth (Cariolle J, 2021).

Telecommunication participates in the economic development of countries by reducing transaction costs and improving market efficiency (Aker and Mbiti, 2010).

Where should we place the cursor between promoting economic activity through fiscal measures and collecting tax revenue for public funding purposes? What design should be implemented for this taxation, which today often takes the form of specific taxes[2], like those usually used for alcohol and tobacco?

What should be the level of taxation on mobile phone operators?

In the economic literature, two approaches exist. For some, the limited number of telecommunications operators would allow them to benefit from their operations[3]. Following this logic the tax regime applied to telecommunication should follow the same schema as applied to the extractive industries, thus including, in addition to taxes under the ordinary law regime, special taxes such as mining royalties, surface royalties, or even rent tax, which would enable States to capture a share of the rent.

For others, telecommunications operators participate in the bridging of the digital divide and thus the development of many other sectors of activity, thus justifying potential tax incentives.

With the app https://data.cerdi.uca.fr/telecom/, we were able to estimate the tax burden on the mobile tele­communication sector in 25 African countries.[4] This tax burden encompasses not only standard and special taxes under the control of the Ministry of Finance (MoF) but also fees raised by the national telecommunication Regulatory Agency (RA). We compute the Average Effective Tax Rate (AETR) for a representative mobile network operator, which we call TELCO, using the GSMA Intelligence database.[5] The Average Effective Tax Rate (AETR) represents the share of taxes paid by TELCO in what it produces as cash flow during its operating licence.[6]

The AETR ranges significantly across the 25 countries from 33% in Ethiopia, 35% in Morocco, 97% in DRC, to 118% in Niger with an average of 64%. Ethiopia is an outlier of our sample since the liberalization of its telecommunication sector has not yet been done. Special taxes and fees represent a large share of the AETR illustrating some taxation by regulation and a potential tax competition (a race to the top) between the MoF and the RA.

Telecommunication is generally more taxed than the mining sector.

We compare the AETR of TELCO to that of a representative gold mining firm and a standard firm with similar gross re­turn over the period. The tax burden of the tele­communication sector is higher than that of the mining sector in 15 countries out of the 19 countries for which we have data on the gold mining sector.

The Average Effective Tax Rates of a mobile phone operator, a gold mining project and a standard firm: 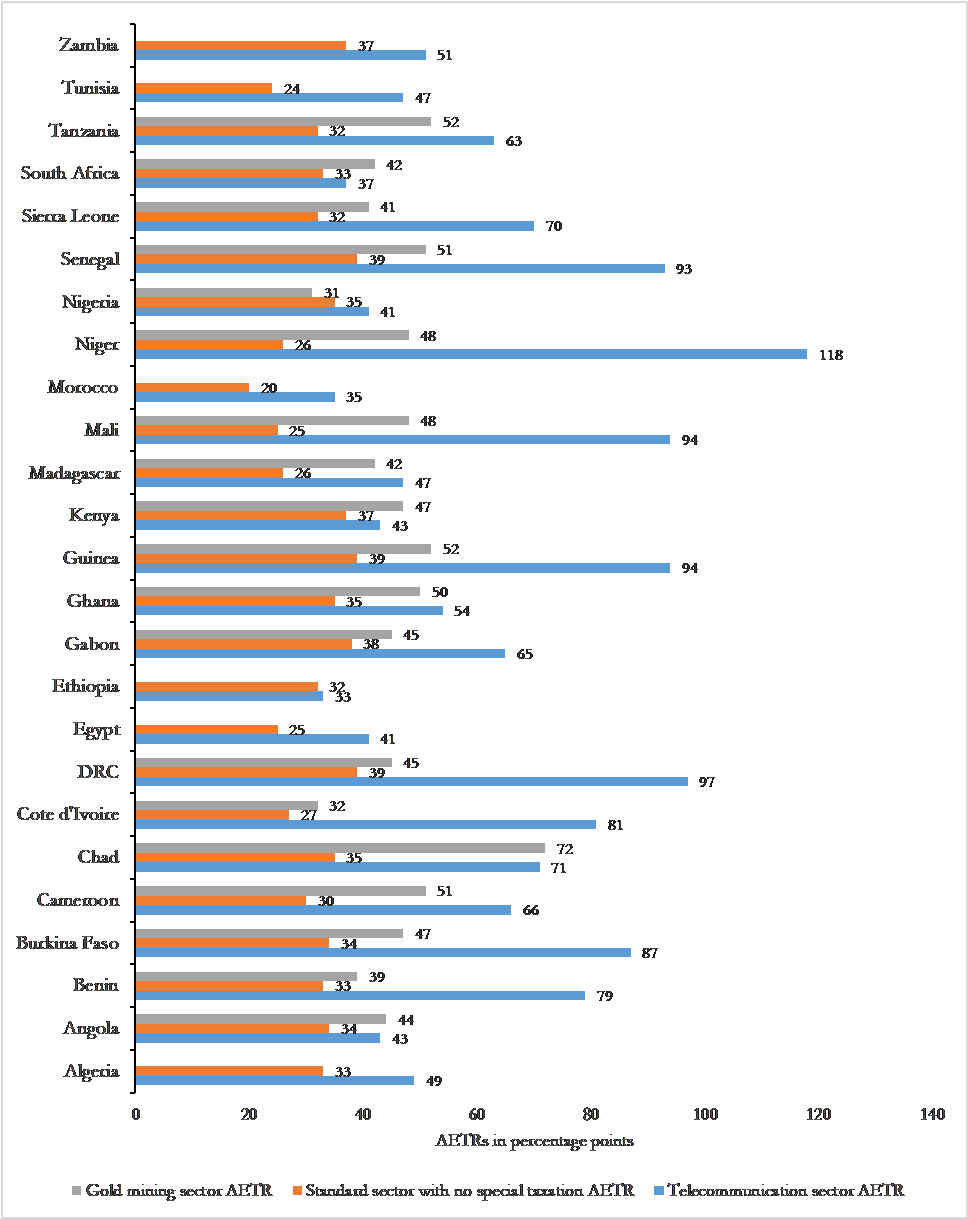 These results are mainly driven by special taxes and fees (Rota Graziosi, Sawadogo, 2020). 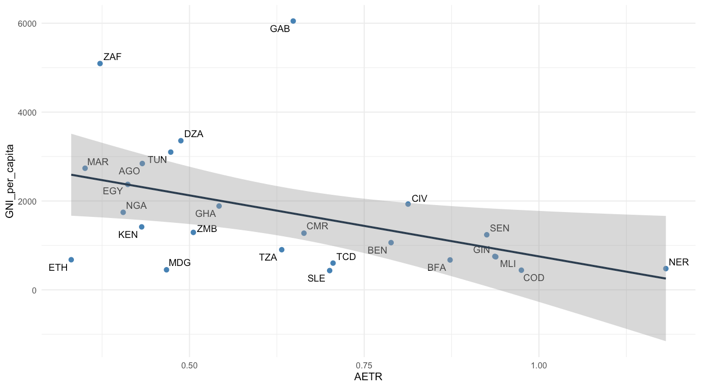 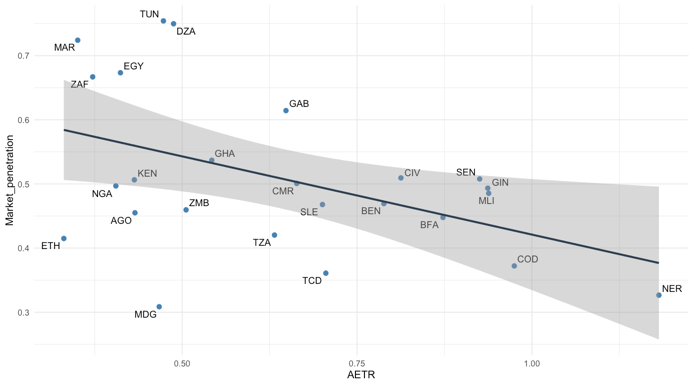 As well as the level of taxation measured through AETR the form of taxation matters in terms of revenue and telecommunication development. Telecommunication RAs can raise distortionary taxes or fees, as Hausman (1998) emphasized in the case of the US Telecommunication Act of 1996. Alternatively, these correlations may also illustrate that countries with more mobile phone penetration rely less on special taxation. This relationship could result from the more powerful lobbying of MNOs in these countries.

Thus, in most countries on the African continent, the tax burden on the telecommunications sector is much heavier than that on the gold mining sector and on the standard sectors of activity without special taxation. This is a counter-productive practice that must be stopped.

[1] The Lebanese government’s Decree 218-34 of July 25, 2018 introduced a tax on the use of social media at a rate of 5 FCFA or equivalently US$ 0.009 per megabyte. Online and street protests pushed the government to cancel this tax a few month later.

[2] The tax is specific when its base is a quantity (e.g. minutes, megabyte…).

[3] However, a limited number of competitors does not systematically lead to an income, as shown by the classic case of Bertrand’s duopoly. This would imply that there is a tacit collusion between telecommunications operators and a failure in the processes of regulation of the sector.

[5] Our approach is close to Djankov et al. (2010) and the Doing Business Report of the World Bank for standard economic activity and the Fiscal Analysis of Resource Industries of the International Monetary Fund for mining and petroleum project.

[6] The cash flow considered here is the pre-tax cash flow corresponding to the difference between turnover and operating and investment expenses.

By : ROTA-GRAZIOSI Grégoire and SAWADOGO Fayçal
END_OF_DOCUMENT_TOKEN_TO_BE_REPLACED
No Comments on Are mobile phone operators overtaxed in Africa?