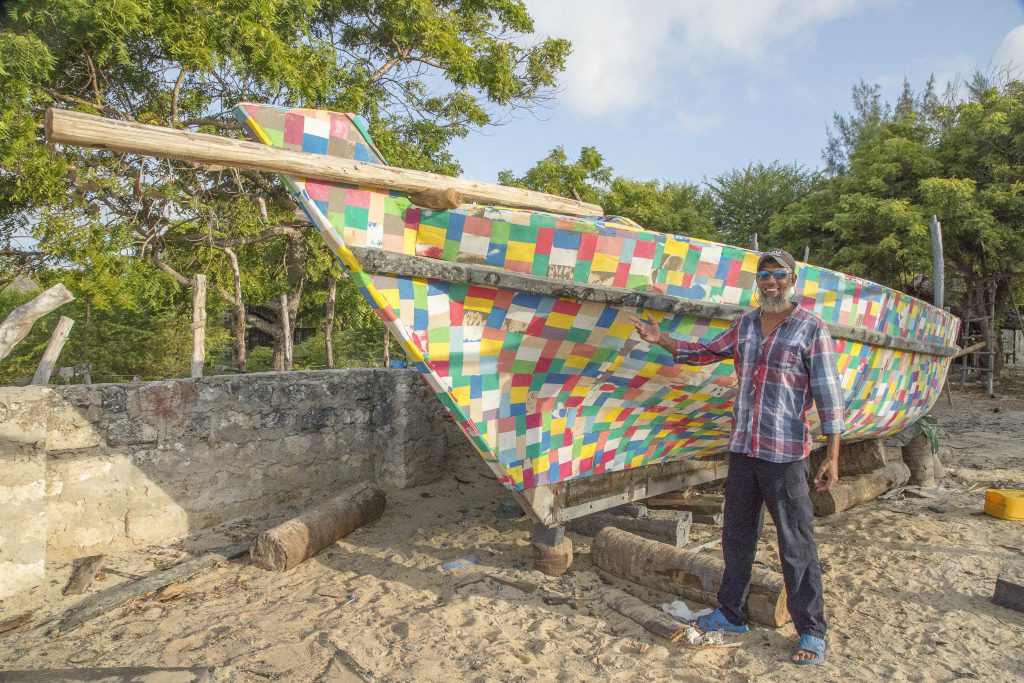 Flipflopi is the world’s first sailing boat made entirely from plastic waste and flip-flops collected from beaches and towns on the Kenyan coast. It works to raise people’s awareness of plastic pollution in the oceans and invites them to rethink their consumption behavior towards single-use plastics.

In the 1950s, 2 million tons of plastic were produced per year. Today, one million plastic bottles are consumed every minute in the world. Every year, more than 500 trillion disposable plastic bags are used, sometimes only for a few seconds. 50% of the plastic produced is intended to be used only once.

Annual plastic production now reaches more than 350 million tons per year, of which 8 million tons end up in the oceans each year (80% being single-use).

Coastal regions are far from being the only ones responsible for plastic pollution in the oceans. Most plastics, and waste in general, are carried from rivers to oceans. Only 10 rivers in the world carry more than 90% of the plastic waste that ends up in the oceans. These include Niger, the Nile, the Indus, the Ganges, the Amur, and the Mekong rivers, which have their source far from the ocean coast.

The Ellen Mc Arthur Foundation estimates that, if we do not change our habits, there will be more plastic than fish (by weight) in the oceans by 2050.

This is an unprecedented environmental disaster.

The African continent is making progress in the political fight against plastic bags.

Africa is the continent that has taken the most national measures against the use and production of plastic bags. 21 out of 54countries have voted for a total or partial ban on plastic bags. By 2018, 58% of them had implemented these bans, although in practice in many countries major difficulties persist in complying with these bans.

Kenya is an example of compliance with the total ban on the production, distribution and use of plastic bags on its territory. This measure, introduced in 2017 under the leadership of Environment Minister Judy Wakhungu (now Kenya’s Ambassador in France), is the strictest in the world, with hefty fines and even prison sentences for non-compliance.

In comparison, only 5 Asian countries have taken such measures.

The origins of the project or how a swim in the Indian Ocean became a world first.

In early 2016, Ben Morison, manager of an online travel agency, was swimming in the warm waters of the Indian Ocean in Zanzibar. On the beach, a multitude of flip-flops….The crazy idea of the Flipflopi project was born.

Ben and his ally Dipesh Pabari, set out in search of a master dhow builder, the traditional boat that has been sailing on the Indian Ocean for over 1000 years. They met Ali Skanda in Lamu.

Ali comes from a family of carpenters in Lamu that traces its roots back to the very first settlers arriving on Lamu in the 1300’s. His father and grandfather were Dhow builders. Ali has taken up the baton admirably and one of his boat is settled in the National Museum in Washington DC. 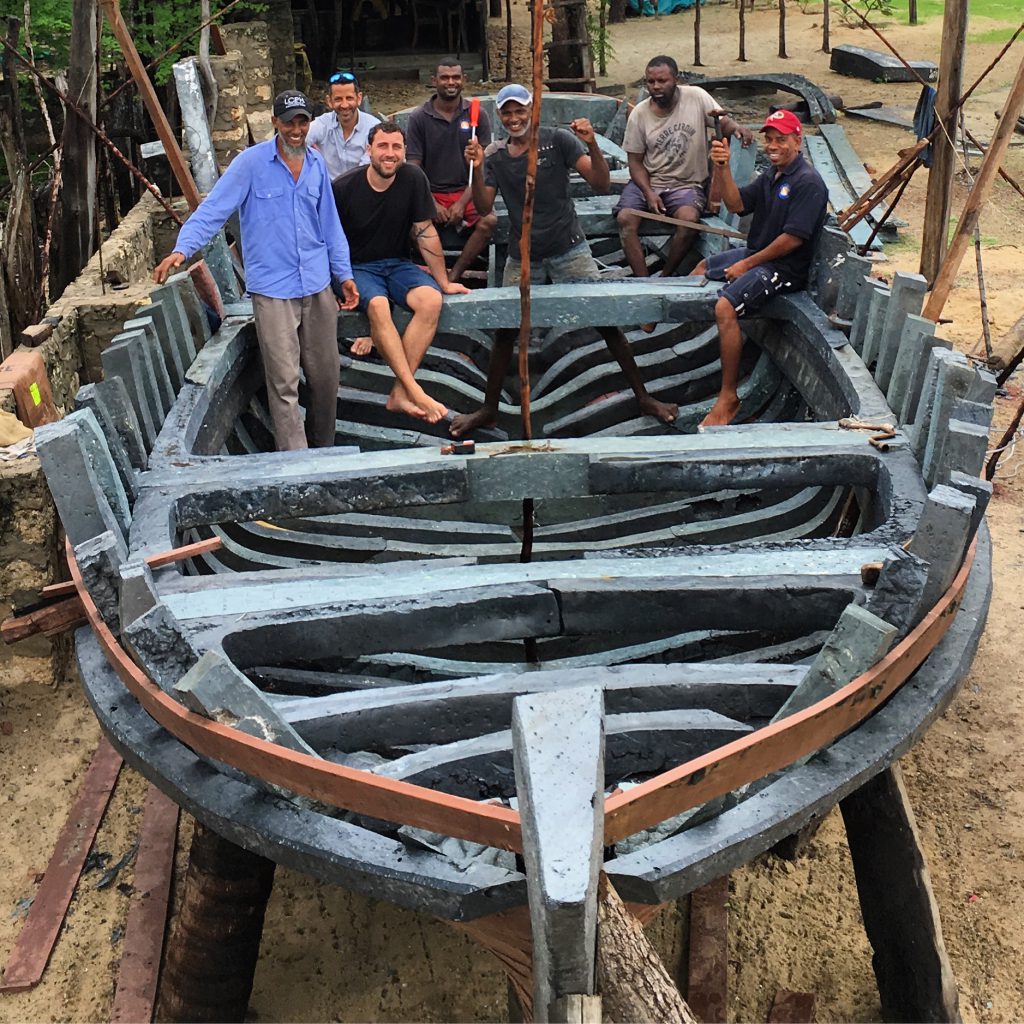 Armed with their deep environmental awareness and a strong desire for change, the trio, joined by a team of determined volunteers, launched the basis of the plastic revolution.

“We don’t love our world. By just focusing  on the short-term vision, people are just looking ot the money today, and they don’t think of what is coming next. Everyone today is affected by plastic, but we have the solution. “Ali Skanda

Beach clean-up actions were organized in the Lamu archipelago. Nearly 50 tons of all types of waste were collected. The construction of the boat started in November 2016 in Ali’s workshop in Lamu.

Once collected, the plastic waste was sorted by category (PET, HDPE, PP), then crushed, melted and ground to produce the first parts of the boat.

We wanted to inspire change in a positive way, so we decided to cover the whole boat with flip-flops, making it multicolored and attractive. Flip-flops are one of the most important components of plastic waste on Kenya’s beaches. Naturally, we named the boat Flipflopi.

In the end, nearly 10 tons of plastic and 30,000 flip-flops found on Kenyan beaches were needed to build this 9-metre long prototype. Flipflopi, the world’s first boat made entirely from waste plastic was launched in Lamu on September 15th 2018, during the World Cleanup Day.

The expedtition from Lamu to Zanzibar, the plastic revolution on the way

Indeed, among the 20 countries that contribute the most to plastic pollution in the oceans (in millions of tons per year), 9 are bordered by the Indian Ocean (Indonesia, Sri Lanka, Thailand, Malaysia, Bangladesh, South Africa, India, Pakistan, Myanmar). Depending on the currents, all this plastic waste is found on the beaches of the whole world and or in the famous 5 plastic continents that now populate our oceans.

“The dhow was the first point of communication…it connected all the continents. Today, we are using the dhow to communicate the urgent issue of marine plastic pollution.” Ali Skanda

On 24 January 2019, Flipflopi embarked on its first expedition (sponsored by the Clean Seas initiative of the United Nations Environment Programme) from Lamu to Stone Town in Zanzibar. 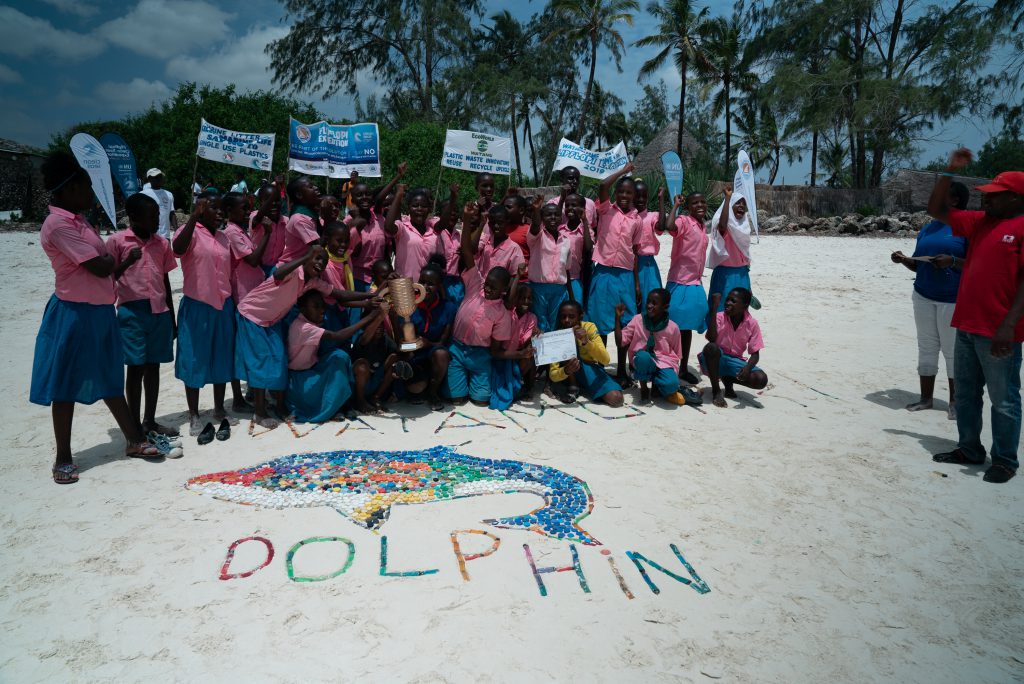 Throughout the 580 kilometers covered and during the 14 days of the crossing, the project team:

– organized 8 community events with more than 50 partners in environmental protection and ecotourism;

– met more than 3000 children who had the opportunity to get on the boat and become aware of plastic pollution in the oceans;

During the expedition, we managed to attract the attention and support of many key public and private stakeholders, such as the Kenyan Ministry of Environment, the Vice President of Zanzibar or the PETCO Kenya plastics industry group, who all promised to take action against plastic pollution in the oceans.

“Through the expedition, we have brought together the background conditions for change to happen.. “Ben Morison

Following the expedition, 33 hotels on the Kenyan and Tanzanian coasts pledged to ban the use of plastic straws and bottles in their establishments.

In Stone Town, Flipflopi was welcomed by the President of the United Nations General Assembly on the Environment where, following the expedition, the ship was at the centre of its Exhibition on Sustainable Innovations at UNEP headquarters in Nairobi in March 2019.

The follow-up of the project, think bigger and further on

Flipflopi (9 metres long) allows to sail short distances. As shown from Lamu to Zanzibar, the boat can inspire many people to rethink their plastic consumption. But it will not solve the plastic problem on Kenyan beaches. Indeed, plastic in the oceans has no borders and tons of plastic from all over the world will continue to be washed up from Lamu to Wasini.

It is useless to think LOCAL if we want to fight against plastic pollution in the oceans. It is imperative to think GLOBAL.

That’s why we now want to build a bigger boat (20 meters long), Flipflopi Kubwa, (“kubwa” meaning big in Kiswahili), still entirely made of plastic waste found on Kenyan beaches, capable of sailing on all the seas of the world. This boat will allow us to deliver our message throughout the Indian Ocean and beyond.

To learn more and help the Flipflopi project: http://www.theflipflopi.com/donate

Matthieu Lougarre: « More than synthetic vanillin, it is the legislation on product labelling that is problematic »