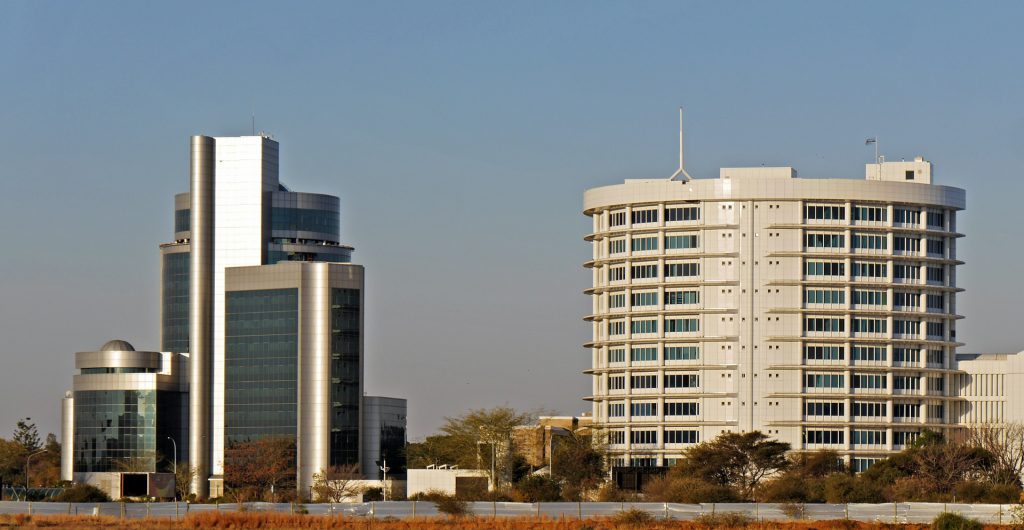 Ranked 7th of African countries in 2016 in terms of attractiveness by the Sustainable Competitiveness Observatory (SCO), Botswana (68), the only landlocked country in the top 10 African countries, outperforms the continent average (46), and does better than Algeria (67) and Ghana (66). 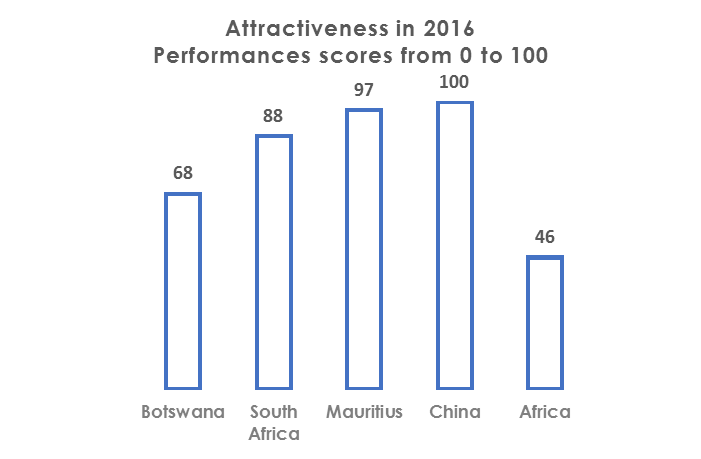 Bechuanaland, the country where nothing happens

Botswana, a vast landlocked desert country in southern Africa, which was called Bechuanaland in colonial times, was the country whose British administrators often said “nothing ever happens there”. At independence in 1966, Botswana was one of the poorest African countries. The only industry was the national slaughterhouse (Botswana Meat Corporation). Botswana had a poor road infrastructure (12 kilometers of paved roads!) and very limited human capital (22 university students!). With a mainly agricultural economy, the country imported most of its consumption and exported most of its production (Harvey and Lewis, 1990).

One year after independence, the discoveries of the Opara (1967), Jwagneng (1973), and Letlhakane (1973) diamond deposits radically changed the structure of Botswana’s productive system, and changed the country’s economic trajectory to build a model of success and prosperity in Sub-Saharan Africa. Botswana has moved from a pastoral economy, in which agriculture accounted for 40% of GDP in 1966, to a natural resources economy in which agriculture accounts for 2.4% of GDP in 2016. Dunning (2008) estimated that the average annual growth rate of diamond exports over the period 1974-1994 was 30%. Today, diamonds account for 80% of export earnings, and contribute 30% of GDP.

As the world’s leading diamond producer, the prosperity of Botswana’s economy is based on the wealth of its subsoil. This is an exception, because the economic literature shows that countries’ endowments of natural resources are often more a curse than a way to escape from underdevelopment. Generally, the exploitation of minerals generates greed and reinforces rent-seeking behaviour among the ruling elite. These rivalries reinforce undemocratic regimes and create inequalities that most often lead to civil conflicts and destabilization of the political system (see Colllier and Hoeffler, 2005).

Avoid the curse of natural resources

As a local Botswana proverb says: ” The king is king by the grace of the people”, and so Botswana’s tradition carries the seeds of democracy (see Schapera, 1938; Gulbrandsen, 1995). In the Tswana tribes, there was an “implicit arrangement” between the people and their leader (Martin, 2008). The leader was responsible for the provision of public goods and was accountable to the people. Political life was organized around the kgotla, a kind of public meeting where most tribal affairs were discussed (new taxes, public works, conflict resolution, promulgation of decrees). The kgotla provided a forum where the people could publicly approve or challenge the chief’s policy and leadership.

Acemoglu, Johnson and Robinson (2002) argued that British colonization had in no way altered this pre-colonial tradition, which was inclusive and constrained the political elites. After independence, the crucial decisions taken by the leaders, in particular Presidents Khama and Masire, made possible the maintaince and strengthening of these institutions, thus sustaining the economic interests of both the ruling elite and the population. In other words, the diamond wealth has provided revenues which have been well enough managed so that no group has dared to take the initiative to challenge the social status quo. This rent made possible infrastructure investments and the implementation of public education and public health services. Per capita income (?) has quadrupled in half a century. The poverty rate, which was 50% at the end of colonization, has reduced to 19%.

Diamonds are not for ever

However, not everything is perfect in Botswana. While economic development has been rapid, the problem of wealth redistribution among the population has been only partially satisfactory. Inequalities persist. About 30% of the population lives below the United Nations poverty line ($1.25 per day per capita). Economically, the country has developed a dependence on the diamond industry, and is highly vulnerabe to international diamond price instability.

The SCO’s economic and structural vulnerability index shows that in 2016, Botswana was above the African average (37) with a score of 43, 15th of the most economically vulnerable African countries. The main cause of this vulnerability is the concentration of activity on a small number of products, and its high exposure to export shocks.

Sources of structural economic vulnerability in 2016

Given the recent decline in the world diamond prices, and the depletion of diamond deposits (Basdevant, 2008), the Botswana government is preparing the post-diamond period. The eleventh national development plan (NDP 11), launched in April 2017, lays out expectations around some key priorities: diversification of sources of growth, development of human and social capital, sustainable use of national resources, consolidation of good governance, strengthening of national security, and establishment of an effective monitoring and evaluation system.

The root of Botswana’s attractiveness

The Sustainable Competitiveness Observatory bases its assessment of attractiveness on four characteristics: political and economic governance, infrastructure, human and financial capital, and the market.

Sources of attractiveness in 2016

Political and economic governance is central to Botswana’s attractiveness. In 2016, when compared with the 52 African countries, and the major emerging countries (Brazil, China, India), the country is in the top 10 with a score of 83, almost twice the average African score (48).

Politically, the country has benefited from stability since its independence. Strong institutions, based on Botswana’s traditions, ensure political and individual freedom. The accountability of policy makers is illustrated by a high level of government efficiency and a good quality of regulation. However, doing business and the business climate is lagging behind what could be achieved, calling for efforts to attract a wider community of foreign investors.

With a score of 41, Botswana outperforms Kenya (30) and Nigeria (29), is on a par with Ghana, and ranks first of the landlocked countries for infrastructure. Access to mobile phones is one of the best in Africa, however the internet is only slightly above the low African standards. As far as energy is concerned, Botswana has the continental average in terms of access, with a quality of electricity supply that could be improved. The energy situation is expected to improve significantly in the coming years with the increase in the productive capacity of the Morupule A and Morupule B power plants, ending a decade of energy shortage and allowing Botswana to become an exporter in the sub-region.

Although the country suffers greatly from its landlocked and desert nature, significant efforts have been made in the transport and logistics sector. With 50% of the road networks paved (a density of 40 km of road per 1000 km² of surface area), Botswana’s score is above the African average (35 against 29). The country has also been able to take advantage of good connectivity to international ports, such as Durban, which is more than 750 kilometres from the capital, Gaborone.

After infrastructure, the market is the second weak point in the attractiveness of Botswana’s economy. In the African ranking, Botswana is 19th with a score of 52, which is above the African average (45). In detail Botswana is slightly worse for market size and dynamics, but is better than the African average for potential market demand as measured by size of middle class (45 versus 35), and stock of foreign direct investment (FDI).

With a per capita GDP of $7,596 in 2017, 70% of the population lives above the United Nations poverty line of $1.25 per day per capita. The diamond revenue has allowed the emergence of a middle class, which has a purchasing power that allows it to contribute to a significant internal market. This market will be bigger if the social development policy, initiated by the Eleventh National Development Plan (NDP 11), achieves its objective of more equitable income (?) redistribution by 2023. Botswana ranks 9th in Africa in terms of the attractiveness of foreign direct investment, with an estimated stock of FDI per capita of US$2,533. It is higher than neighbouring South Africa, which ranks 10th, and is above the African average ($1,900), but still remains a long way from the $30,000 per capita of the Seychelles.

Market size and dynamics in 2016 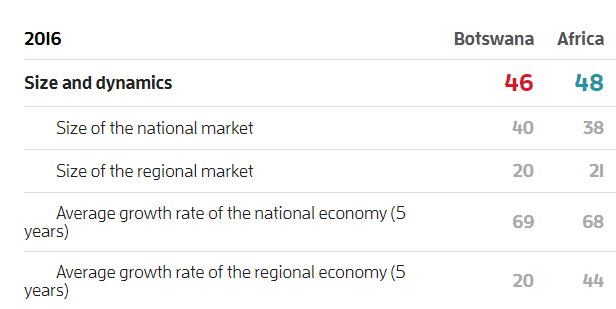 As shown in Table 2, the size of GDP and its dynamics are similar to other African countries. Over the period 2011-2015, the average annual growth rate was 4.2%, close to the African average (4%).  At the regional level, performance is more mixed.  As a member of the Southern African Customs Union, Botswana has a fairly dynamic regional market. Over the period 2011-2015, the average annual average growth rate of neighbouring countries was 3.9%, due in part to the poor performance of South Africa, the dominant economy in the southern region.

With a score of 68, human and financial capital is an asset in the attractiveness of Botswana’s economy, it is above Morocco and Ghana, and is well above the African average (47).

Investments in education and health infrastructure have resulted in an effective education system, with 26 schoolchild per class in primary schools compared to an average of 41 in other African countries. The literacy rate is 94% and the enrolment rate is 77%, well above those of the continent, which are 72% for literacy and 50% for enrolment. In the area of health, Botswana’s infant mortality is one of the lowest on the continent. Botswana has a high incidence of HIV/AIDS among adults: 22% of adults have HIV, the 3rd highest rate in the world. In financial terms, the country is doing better than the continental average. Botswana’s Stock Exchange is the 6th largest of Africa, with a capitalization of 34% of GDP.

The assessment of the sources of attractiveness through the prism of the SCO reveals, despite some geographical handicaps (isolation and aridity of the territory), that Botswana has good governance, strong human and financial capital, and the infrastructure to stimulate a diversification that will reduce structural dependence on diamonds. However, if the aim is to boost entrepreneurship and industrial development, further reforms are needed, and the authorities will have to remain active to improve the reliability of the electricity supply. They will also have to work to improve the business climate, in particular to facilitate the procedures for setting up businesses, and to find faster and more effective responses for the execution of contracts.