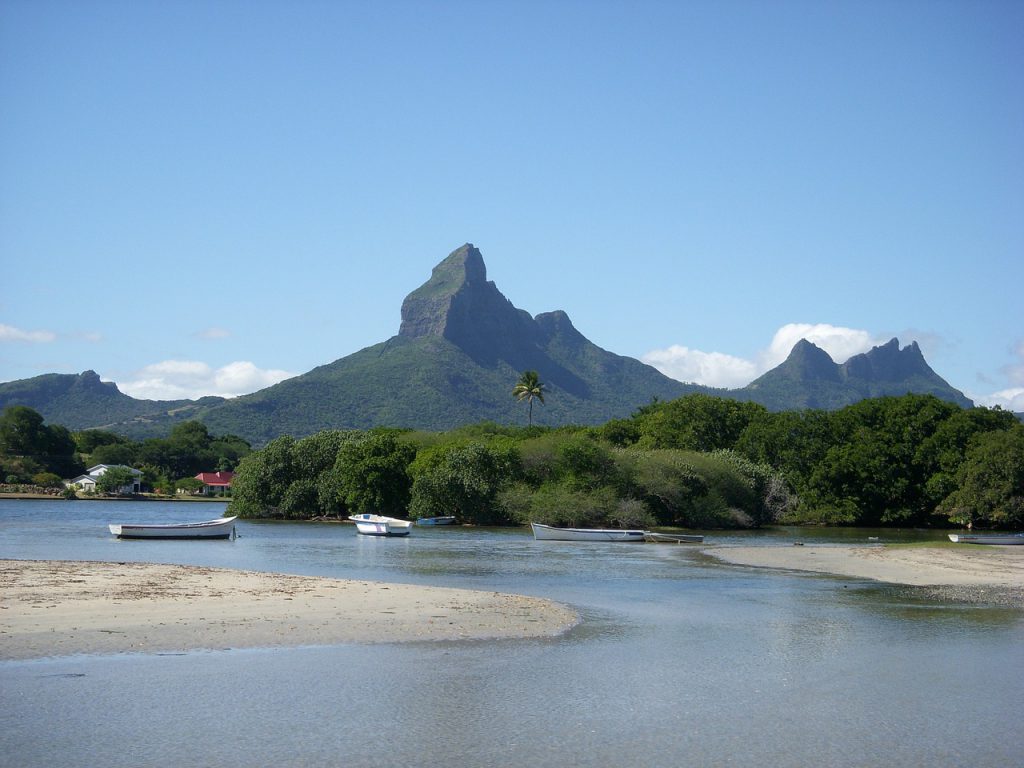 The Sustainable Competitiveness Observatory (SCO) ranks Mauritius’ attractiveness as the leading African country in 2016, just behind China. The small archipelago of the Indian Ocean does better than South Africa (2nd) and even more surprisingly better than Brazil and India. 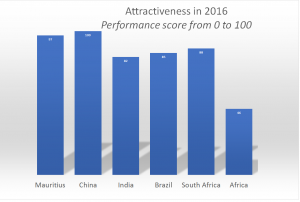 Mauritius is one of the densest populated countries in the world with a population of 1.3 million inhabitants spread over a 2040 km² area. The island was not predestined to be a land of economic performance. At the beginning of independence in 1968, agriculture was at the core of the local economy. Agriculture was then mainly dependent on a sugar sector, vulnerable regarding to trade and unfavourable geographically due to the remoteness of its main trading partners. The country was also facing a high population growth coupled with a high unemployment rate, in a context conducive to ethnic tensions. Neither James Mead nor Vidiadhar Naipaul, respectively Nobel Prize winners in economics (1977) and literature (2001) predicted a bright future for the island. However, Mauritius has experienced one of the most rapid developments in African history. From 1969 to 2013, average annual GDP growth was 5.3% compared to 3.8% for sub-Saharan Africa. The “Mauritian miracle” has enabled the island to move from a low-income country to an upper-middle-income country.

The Mauritian miracle: what Mead and Naipaul failed to see

After independence in 1968, Mauritius obtained export quotas from the “Sugar Protocol” to the European Union (EU). The Multifibre Agreement of 1974 also created an institutional environment favourable to the establishment of foreign investors in the textile sector. Subramanian (2001), Frankel (2011) and Stiglitz (2011) argue that the institutions established by Prime Minister Ramgoolam and those responsible for the transition to independence have enabled the country to manage optimally the economic benefits generated by these two mechanisms. These advantages were undeniable since between 1977 and 2000, the price per ton of sugar guaranteed by the EU was on average 90% higher than the international market price. Subramanian and Roy (2001) estimate the average annual contribution of the sugar rent to Mauritius’ GDP for the period 1977-2000 at 5.4%. At its peak, the impact of the multifibre agreement culminated at 3.5%.

This strong economic growth was supported by effective economic policies, allowing a structural transformation and a diversification of the Mauritian economy. Mauritius has thus moved from an agricultural economy based on the exploitation of sugar cane to an industrial economy with an industrial free zone based on the Taiwanese model.

Towards a second Mauritian miracle…?

Announced in 2014, the plan for a “second miracle” is expected to make Mauritius a high-income country by 2020, a real challenge. Svirydzenka and Petri (2018) estimate that an average annual growth rate of 5% would be required to achieve this objective by 2021. However, the end of trade preferences for textile exports in 2005 and the total dismantling of the “Sugar Protocol” in 2017 force local actors to invent a new economic model. Textile sector activity is contracting, mainly because of cost arbitrage, leading major international contractors to retreat to places where labour prices are the cheapest, particularly in countries such as Bangladesh and Ethiopia. Growth drivers are possible, especially in the service sector. Tourism has grown considerably in recent decades. Services with high productivity are gradually emerging backed by the effective use of new information technologies, as in the financial sector. To do this, the authorities are focusing on technology – promoting smart city entrepreneurship, luxury tourism, the blue economy and… tax incentives.

Where does Mauritius’ economic attractiveness come from?

An effective political and economic governance

As shown in Figure 2, the main source of Mauritius’ attractiveness remains its effective political and economic governance. Over the 52 African countries ranked in 2016 and submitted to the benchmarking of the major emerging countries (Brazil, China, India), Mauritius is first of the class with a score of 100, more than twice the average African score (48), ahead of South Africa (78) and China (52). Mauritius clearly stands out for its economic governance because of the efficiency of its public authorities and the quality of its regulations. The island is second behind China for facilitation of the business environment. On a more political level, the institutional choices made by the authorities in the transition to independence have enabled the country to maintain a certain political stability. Mauritius is in the third tier of countries that respect political and individual rights, on a par with Botswana in terms of political stability.

Figure 2. Sources of attractiveness in 2016,

With a score of 84, Mauritius is the African country with best infrastructures. It outperforms China, but also the countries of North Africa and the Seychelles. An illustration of this performance, however, favoured by the small size of the country, the African average stands at only 30. With 1196 km of roads per km², the road network is very dense, 98% of which is paved. Mauritius is in the African average due to its logistics performance (LPI) and its connectivity to international ports.

Regarding to telecommunications, access to the Internet and mobile telephony remains among the best on the continent. In terms of energy, Mauritius is above the African average, not only in terms of access to service but also in terms of the quality of electricity supply. However, Mauritius remains vulnerable to external energy shocks, especially since 80% of its energy comes from fossil fuels. In order to reduce this dependence and move towards a low-carbon economy, the Mauritian government launched a project in November 2017 to increase the share of renewable energy in the energy mix to 35% by 2025, thereby reducing carbon dioxide production by 4.3 million tons.

Mauritian performances are much lower in the Market section. Mauritius scores 63 out of 100 and ranks 10th in Africa. The country’s geographical position remains a handicap. Due to its remoteness, Mauritius’ regional market is very limited and weakly dynamic. Over the period 2011-2015, there is a regional average annual growth rate of 2.5% when the African average reaches 4%. At the national level, the annual average growth rate over the period 2011-2015 is in line with African standards.

With a GDP per capita in 2016 of $9,822, 92% of the population lives above $1.25 per day and per capita, the United Nations poverty line, Mauritius has a middle class that constitutes a significant domestic market. Mauritius ranks fifth in terms of attractiveness for foreign direct investment (FDI), with an estimated stock of FDI per capita of US$3,605. The island does better than the African average ($1,900), but far from the $30,000 per capita of Seychelles…

Mauritius’ attractiveness also depends on its human and financial capital. With a score of 93 out of 100, the island is in second position to South Africa and far above the African average (47). With literacy and gross enrolment rates at over 95%, Mauritius has an efficient education system. The introduction of compulsory education up to the age of 16 in 2005 greatly improved access to secondary education and provided schools with modern infrastructure. There is an average of 19 pupils per class in primary school compared to an average of 41 pupils in African countries.

Figure 3: Human and financial capital in 2016

On a financial side, the Stock Exchange of Mauritius is the second largest stock exchange in Africa (after South Africa) with a market capitalization that reaches 62% of GDP. Mauritius’ banking system is the most pro-business in Africa. In 2016, the latter granted loans to the private sector amounting to 97% of GDP. Doing business 2017 ranks Mauritius as the fourth African country in terms of procedures for obtaining bank loans.

To conclude, the assessment of Mauritian performance by the OCD reveals that despite an unfavourable economic geography, the island has a good governance and many assets (infrastructure, human and financial capital) to become a high-income country by 2020. To this end, the Mauritian authorities are focusing on high-tech and high value-added sectors (biotechnology, smart cities, luxury tourism) to maintain the growth momentum in the medium and long-term.

Meade, J.E. et al. (1961) The Economics and Social Structure of Mauritius. Report to the Government of Mauritius, Londres, Methuen.

Svirydzenka, K., Petri, M. (2017) Mauritius: The Drivers of Growth–Can the Past Be Extended? Journal of Banking and Financial Economics, vol. 2 (8).

Improving health services through entrepreneurship: the case of the clinic PROCRÉA

The digital revolution in Sub-Saharan Africa: What perspectives for employment?